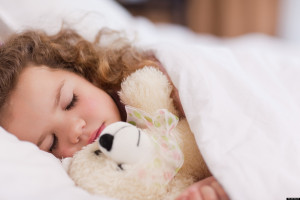 Obstructive sleep apnea (OSA) is being increasingly recognized in the pediatric population. Although OSA has long been known to occur in adults, until recently, this diagnosis was not considered significant in the health of children. Some experts estimate that 1-3% of children are affected by sleep apnea.

There can be intrusive and possibly dangerous health consequences in some children if obstructive sleep apnea is not diagnosed and appropriately treated. Therefore, this diagnosis should be considered more frequently in children.

OSA is a disorder that is characterized by recurrent partial or complete upper airway obstruction which occurs during sleep. Symptoms can include snoring or noisy breathing, apnea (transient cessation of breathing), mouth breathing, restlessness during sleep, abnormal sleep position, bedwetting, growth disturbances, behavioral or attention disturbances and/or signs of sleep deprivation during the day, such as sleepiness, irritability or mood swings. The disease occurs most frequently between two to six years of age, but can occur during infancy through adolescence. Girls and boys are equally affected. There are certain risk factors that may predispose a child to OSA.

The most common abnormality found in children with OSA is enlarged adenoids and tonsils. Other presentations of sleep apnea are not always so apparent, however. Sometimes parents notice that the child snores, thrashes or is restless, but another child will have no overt problems. In addition, OSA commonly occurs during REM sleep, a phase of sleep children usually enter early in the morning. This, of course, is a time that sleep is not likely to be witnessed by parents.

There are other unusual signs and symptoms as well. Unexplained bedwetting can be a symptom of OSA, since disturbances in sleep lead to abnormal and increased urine production. Some studies have associated failure to thrive with OSA. This may be caused by a disruption of growth hormone release, which commonly happens at night. Some children demonstrate behavior problems or poor school performance.

Furthermore, some studies have associated ADD/ADHD with OSA. Rarely, more serious conditions can result from OSA, such as heart problems and hypertension.

Although many physicians feel that a clinical diagnosis of OSA is reliable, the gold standard for diagnosing this disorder is a sleep study or polysomnography. This can be conducted overnight at a specialized sleep center. While sleeping, the child is monitored for heart rate, respiratory rate, oxygen saturation, brain activity, eye movements, and body movements.

In spite of the fact that polysomnography is considered the gold standard for the diagnosis of OSA, this test has not been standardized or validated in children. It is important to find a sleep center that has experience working with children. Some clinicians advocate the use of home sleep studies or the use of audiovisual equipment to document sleep disturbances. These are largely considered investigational, however and not routinely available.

Treatment for OSA in children is different from that in adults. The most common treatment in children is a T&A or adenotonsillectomy, removal of the tonsils and adenoids. One study found that nine of ten T&A’s were performed for OSA. Other surgeries may be needed depending on any contributing conditions, such as craniofacial abnormalities. Orthodontic appliances sometimes help by widening the upper palate, thus enlarging the airway. Occasionally, CPAP (constant positive airway pressure delivered through a mask) therapy is used, but most children don’t do well with it. Other interventions used in adults, such as uvulopalatoplasty, are not commonly done in children.
For children with adenoid and tonsillar enlargement, removing them usually cures the OSA. Studies indicate that positive outcomes from this surgery, where appropriate, range from 75% to 100%. For those who fail to respond to T&A or who are poor surgical candidates, CPAP is an option. Not all children with OSA should undergo a T&A. There are inherent risks in this procedure, such as bleeding, infection and risk of complications from anesthesia. T&A should definitely be considered, however, in children with the diagnosis of OSA.

The American Academy of Pediatrics has issued guidelines for the diagnosis and management of OSA. The report recommends screening all children for snoring, polysomnography testing for diagnosis, referral of high risk patients to a specialist, and assessing surgical patients with follow-up evaluations to determine if additional treatment is necessary.